From the Past – About

The infographic, GIF and video below are based on an article written in the ‘The Strand’, Volume 5, Issue 30, June 1893. It was an article called ‘Past Dictates of Fashion’ by one Mr. W. Cade Gall. Written and illustrated over a century ago, Mr. Gall’s ideas still live on today.

The Strand Magazine was a monthly fiction and general interest articles magazine, published in the UK, which ran from around 1890 to sometime in the 1950s. Perhaps its most well known work was/is a collection of short stories about ‘Sherlock Holmes’ the world famous detective. 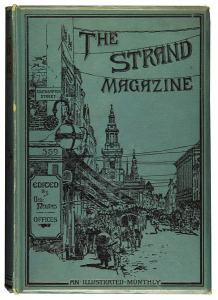 The adventures of Holmes and his ever present sidekick, the grumbling and mumbling Dr. Watson, are still as popular as ever today. Eventually totaling four novels and 56 short stories, Radio and T.V. series, Video Games, and who knows what else.

And it all came from humble beginnings in the Strand Magazine starting way back in the late 19th century. Other contributors to ‘The Strand Magazine’ included H.G. Wells, Agatha Christie, and P. G. Wodehouse among others. But, back to the plot.

This particular fashion article in question was titled ‘Future Dictates of Fashion’. In it, the story goes that someone found a book or ‘volume’ as he called it, in his local Library. Apparently it was written in 1993, which was strange as he was living in 1883.

So this book he had found, was apparently written in a time that was 100 years into the then future. Curious and curiouser, I like it immediately. 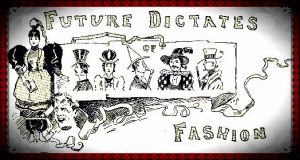 It was a book about Fashion and how it had evolved over one hundred years. It was illustrated, and so the finder in question being somewhat of an artist, drew out the illustrations he seen. Would he get hit by Copyright Laws? Let’s see how he got on.

An interesting point of note is that there were fashion shows as far back as 1800. (I had to look that up). According to Wikipedia:

So it was not unknown at the time in 1893, of the wacky designs of the Fashion Show. When I realized that, the article illustrations started to make sense. Because when I first laid eyes on them, I was thinking to myself that the writer must have been some sort of Opium fiend, and perhaps out of his head on something.

But no, it turns out that the Fashion scene is indeed a bit ‘crazy’ looking. It seems to be based on ‘artistic license’ as opposed to what people would actually wear ‘on the street’. Its like an art-form I suppose.

He was just aware of what went on, and a bit ahead of his time. Don’t forget that communication in those days was nothing like  we are used to today. The Internet was still a century away from our hero (1990 or thereabouts), it was a long way away from those foggy Victorian times.

Let’s have a look at a few of the writer’s imaginative, and futuristic fashion designs, a picture is worth a thousand words and all that. And while we’re at it, I’ve been looking up a few Victorian insults to help get in ‘Victorian mood’, so you might see a Grobblesnoot around, or maybe even the odd Fopdoodle lol.

Anyways, I think the best way to do this would be to compare the predictions with what actually did happen fashion-wise in the real world, so here goes: 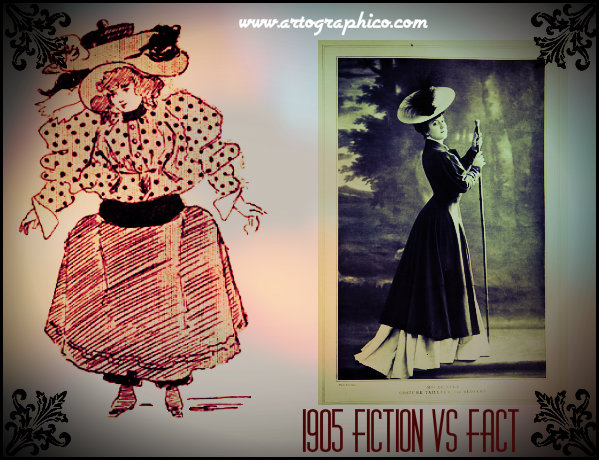 Conclusion? Hmm, he got the hat bit right, but they ALWAYS wore hats in every illustration shown, both men and women. Seems a bare head was just too risqué for the day. Also got the ‘does my bum look big in this?’ bit right too. 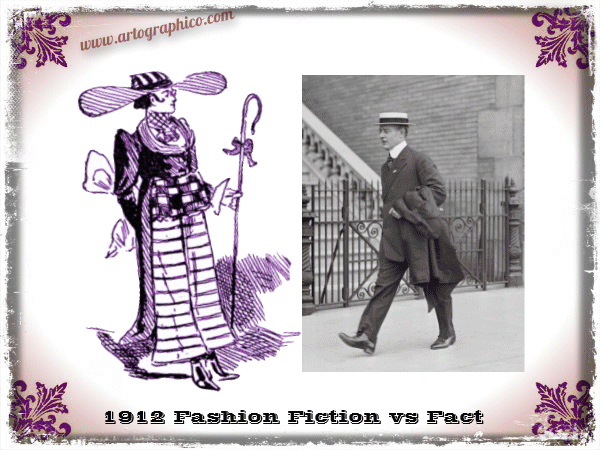 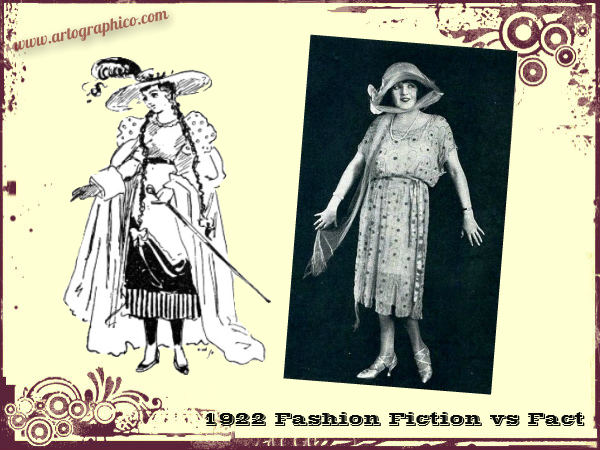 Fashion Prediction vs Fashion Reality. This 1922 prediction comparison above is not too bad actually. Although she’s showing a bit more ankle than would be socially acceptable, naughty girl! lol – Saying that its not totally off target considering that it was still 29 years into the writer’s future. Plus points for that one Mr. W. Cade Gall. 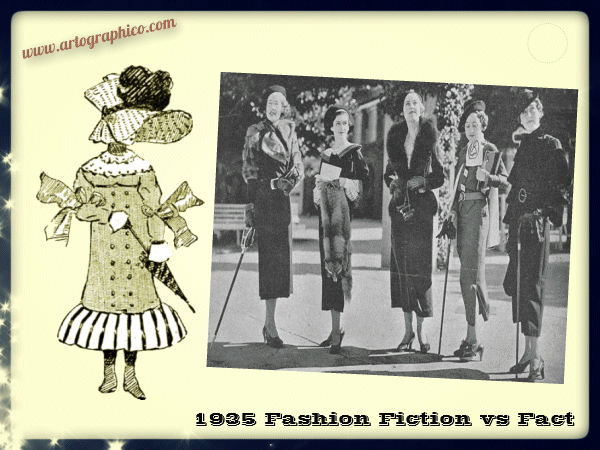 Fashion Prediction vs Fashion Reality. Hmm, its not really happening with this 1935 suggestion. But there are some plus points. The length of the Dress is spot on and there are Hats being worn, albeit not so flamboyant ones. But hey full marks for the Umbrella / Parasol, oh time-traveling wizard! 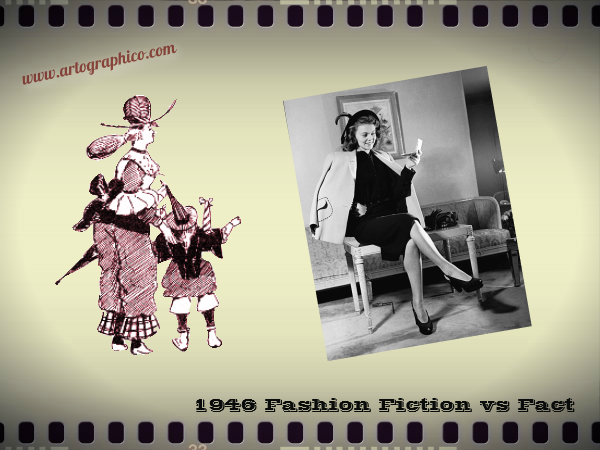 Fashion Prediction vs Fashion Reality. I’m afraid that this is another ‘nul points‘ here for this 1946 ‘futuristic fashion’ nightmare. Not even an Umbrella in sight in the real photo. Sorry Mr. Gall. Let’s see how the 50s go … I know, its ain’t easy. 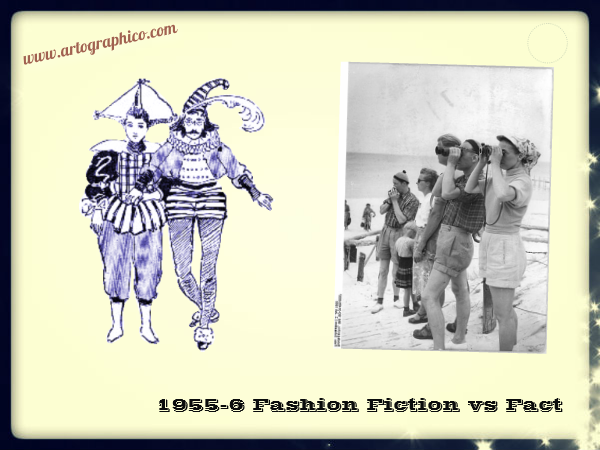 Fashion Prediction vs Fashion Reality Conclusion: In the famous words of Freddie Mercury from the classic ‘Bohemian Rhapsody’, ‘No, No, No, No, No, No, No’. I think that sums it up. Also the look on the face of that guy in the wooley-hat says it all really ;). 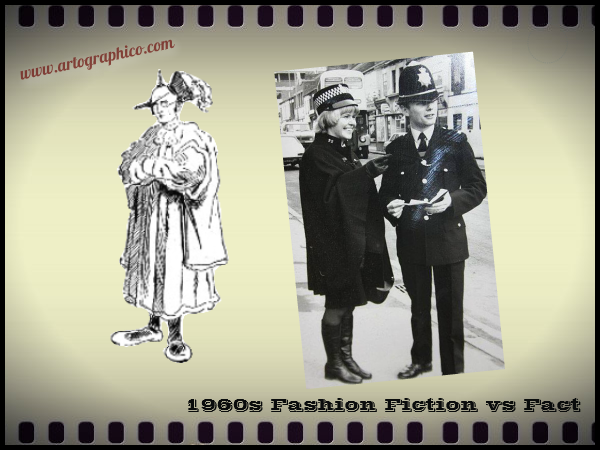 Ok what’s going on here? The guy on the left is supposedly a Policeman from the 1960s. He actually reminds me of some type of Borg from Star Trek, TNG which is set in 2364 and beyond. I like it, now that’s visionary! 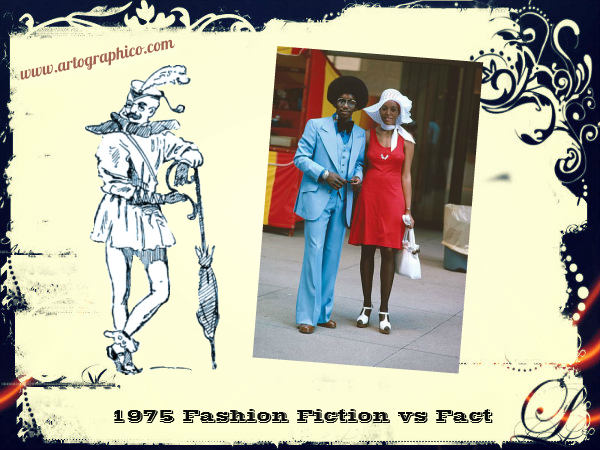 Fashion Prediction vs Fashion Reality Conclusion: Yes indeed the mid 70s. A time of Flairs, Disco music, and Wide Collars. Lots of cool Rock music too don’t forget. But how did our adventurous predictor do here? Hmm not so good, although this illustrated character wouldn’t have looked totally out of place in ‘Village People’. 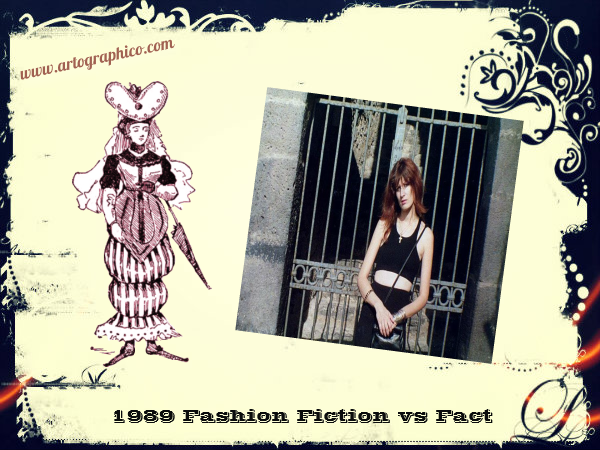 Fashion Prediction vs Fashion Reality Conclusion: In this 1989 ‘futuristic fashion’ prediction, the author and illustrator still seems stuck in a type of ‘Victorian Mode’. But what’s that we see, bare arms? That would have been considered way over the top for those times, so he got that bit right. But not much else holds true. To actually get one part of this imagined futuristic fashion is a fair enough result considering the time span involved here.

note: I think that the ‘model’ here shown in the illustration, is none other than the author’s wife, more on that in the Infographic. 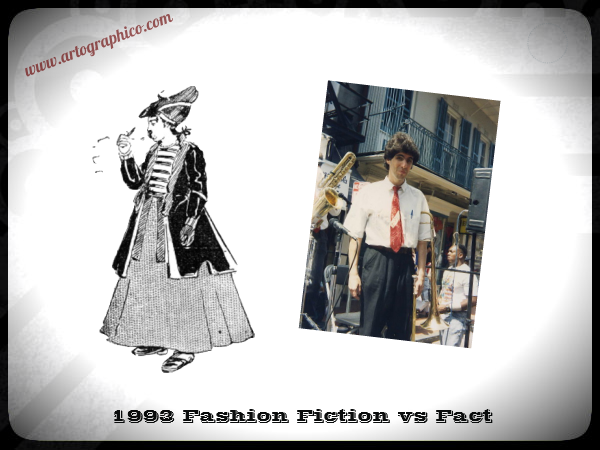 Well we finish off this section on a bit of a misguided note here in 1993. Saying that, the striped T-Shirt is still seen today (think Sting ;)), and the Sandals are still around. Not bad going there Mr. Gall.

note: I think that the ‘model’ here shown in the above 1993 illustration, is based on none other than the author himself, more insight on that in the Infographic.

Future Fashions from the Past Infographic

If you would like to embed this fullsize Fashion Infographic on your website, you can grab the embed code from right at the end of this page.

Music by: www.audionautix.com – thanks to musical maestro Jason Shaw for that.

This GIF displays the original black and white illustrations shown in the original ‘Volume’. Starting off in 1893 and finishing up a century later in good ol’ 1993. What a great idea for an article. The writer certainly put his ‘neck on the block’ for that, a brave move. To think that people are still looking at his ideas now in the early stages of the 21st century. He ‘lives on’.

Here’s a great article written about ‘Past Dictates of Fashion’ by publicdomainreview.org (I love this website, its got some really terrific stuff on it). Have a browse, tell them Artographico sent you.

If you would like to embed the fullsize Futuristic Fashions Infographic on your website, you can grab the embed code right below. Happy embedding! 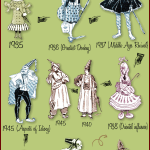